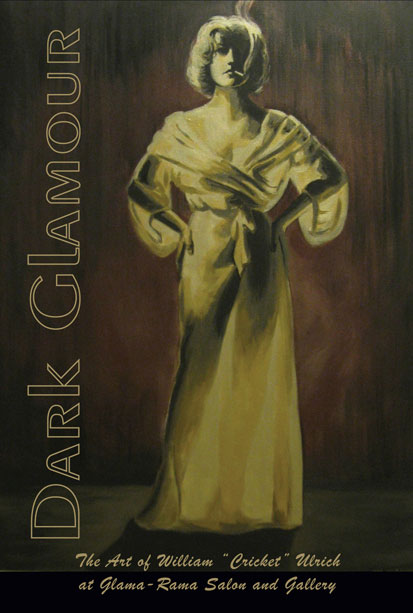 We’re really excited to announce the opening of our new show featuring painter, William “Cricket” Ulrich. The show, “Dark Glamour” will feature painterly portraits of vintage glamour ala Hollywood of yesteryear. Glama-Rama wouldn’t be what it is without glamour and so we think that this show will be an inspired fit.

The Opening Reception will be held on Friday, Sept. 6th, 7-10pm. Beverages & snacks will be provided. This is a free event.

Artist Statement:
I was drawn to the dramatic lighting of 1930’s Hollywood photographs. A painterly effect with metallic paints is what I was after for this show, rather than an accurate portrait of a star. As a teenager, I used to go to the library in Northern Kentucky and look at books of Hollywood stars. Marlene Dietrich became my muse. Fascinated by the lighting, I copied her pictures in pencil. She remains to this day my favorite. Years later, I’m going back to my roots of vintage celebrity glamour and giving it a second look in a new style. Thrown in among the vintage celebrities is an old Fendi ad, a model from the 80’s, and a snapshot of “Tommy”. Whatever I thought was glamour, that I just had to paint.

Not to be content with depictions of well and lesser known stars in metallics, I had to pair fabrics with celebrities to add an element of kitsch. It was fun imagining a fabric from Joan’s house in Mommie Dearest and painting her on it.

The majority of the work in this show is painted on recycled materials. Strips of wood found on the street were glued together to make panels that were painted on or upholstered with remnant fabric. There were a few bought canvases, but most were recycled or given to me.

Artist bio:
I grew up on a farm in southern Indiana. Later, mom found a job in the Cincinnati area—an abrupt introduction for a hillbilly child to life in suburbia. The fortunate receipt of a scholarship to the University of Cincinnati allowed me to study graphic design, and take fine arts classes whenever possible. I kept sketchbooks full of drawings and collages to offset the rigidity of my design training.

After college, for three months, the opportunity to study life drawing and painting (in Paris!) with Ben Long, the American realist painter, was irresistible — and the germination of my Pen & Ink technique. Long’s influence as well as my exposure to various museums, the sights, sounds and experiences of Paris, led me to the decision to pursue the Fine Arts professionally. After Paris, it was hard to stay in Cincinnati, so, naturally, I moved to San Francisco in the fall of 1990.

I learned decorative painting and faux finishing from working on the complete restoration of a Victorian in Hayes Valley. Metallic paints used in projects for painting walls became a favorite of mine and were used to complete the work in this show.