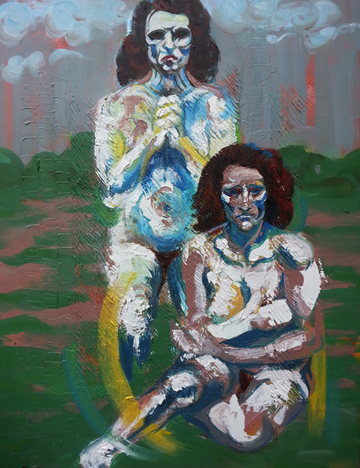 SAN FRANCISCO, CA‐ JAN. 3, 2013 – GLAMA‐RAMA Salon and Gallery would like to announce the opening of their new show featuring San Francisco artist Lillian Shanahan. The opening reception, held at Glama‐Rama (304 Valencia, SF) titled “Cheap Children Hard Labour” will be held on Friday, Jan. 25th, and will run from 7‐10 PM and will feature a live performance by “BESTFRIENDGRRLFRIEND”.

This show offers playful look at the rolls of women and the children they have the power to offspring. The woman, who is oftentimes downplayed in importance because her beauty; beautiful things are delicate and excessive, although made to feel submissive, her beauty is ironically the mother and origins of all life. Her power to bring life into this world and the infinite possibilities that birth can produce.

Lillian Shanahan comes from a large Irish native San Franciscan family. Her work is strongly influenced by history, focusing on the extremes of human nature; from the depravity of man to his potential beauty and magnificence. She doesn’t focus her attention on criticizing or chastising but rather the irony of life and the darkness that resides in us all, often times unnecessarily overshadowing the beauty.

Lillian’s work is also highly influenced by city life and the constant struggle for identity. Attempting to capture the persistent wave of changes that flow through a city, starting at one corner and spreading rapidly to the next, while keeping in mind the new wave that has already begun within it’s midst. How the people in the city try to keep up and to seem or feel important. She does a lot of portraiture and character studies.

check out more of her work at lilyshanahan.wordpress.com