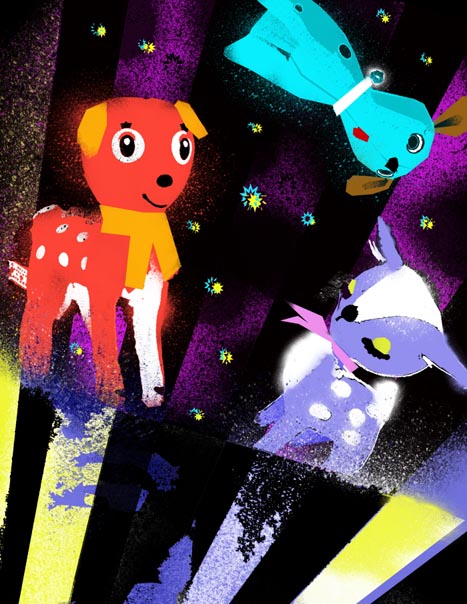 Opening Reception Friday June 6th, 7-10pm
Beverages and snacks will be provided
This is a free event

Glama-Rama Salon and Gallery presents “Haunted Playground – Illustrations by David Hawkins”. Known primarily as a stand-up comedian, this exhibit includes pen and ink as well as digital pieces and is the first public exhibition of his artwork.

The opening reception will feature music composed and performed by his musical alter-ego Mimiuex and will have live stand up performances by Mr. Hawkins and his very special guest Mary Van Note.

David is self taught and works in a variety of mediums. As the creative force behind Dingbat Design he has created posters and artwork for theatrical productions, rock bands and performers including Marga Gomez, Glen Meadmore, The Marsh, Thee Parkside, Truck and many more. He has lived in San Francisco since 1989 and currently resides in the Mission District.

The show in his own words:
“Haunted Playground” is the place where whimsy and melancholy meet. These two emotions have characterized my artwork from the beginning and seemed the perfect image for an overview of my artistic output up to this point.
As a comedian I have infused these works with a fair amount of humor but also within them there is sadness and often something sinister.

Examples of his work (commercial and non-commercial) can be seen at:
www.coroflot.com/dingbatdesignsf

Listen to his musical side-project Mimieux at:
www.soundcloud.com/Mimieux