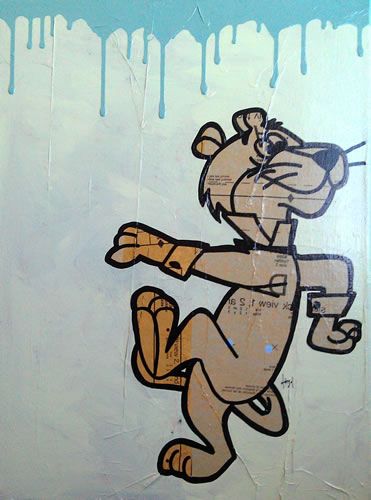 Glama-Rama is happy to welcome back to the walls, mixed-media painter Danyol Leon. His new show, Orale Pues, roughly translates to ‘alrighty then’ or ‘right on’ or ‘there you have it’, spoken by Mexicans and Chicanos. In using it, Danyol explains his feelings on coming to the realization that the cartoon characters that he grew up with were not as innocuous as he had thought.

From the artist:
“Growing up in the 1970’s, I was pretty much raised by TV. Cartoons and popular TV shows were my babysitters and not until later in life did I see some of these characters for what they really were. Some were out right racist while others were truly quite fey. These images have stayed with me through out my life and now have been re-birthed onto canvas. Looking back, my favorite Bugs Bunny cartoons were the ones where he was dressed in drag or singing opera and the Speedy Gonzalez cartoons never quite sat right with me. Looking further into these stereotypes has fueled this collection here at Glama-Rama.”

San Francisco artist danyol was born in 1970 in Orange County, California just a stone’s throw from Disneyland. Growing up he nourished himself on a steady diet of pop art, cubism, and sarcasm. Danyol’s use of his own life and surroundings combine to form a dizzying combination of colors, patterns, and textures. These are then masked out by definitive figures and shapes, somehow bringing some definition to his chaos. While bright and smile inducing on initial viewing, look closely at the found objects in the background; they leave hints as to the deeper meaning of the painting. While combining equal parts nostalgia and current events, Danyol’s pop-influenced mixed media paintings explore the liminal spaces between surface and emotion; gender roles and race, responsibility and reality; along with other inconsistencies in our fragile social fabric.