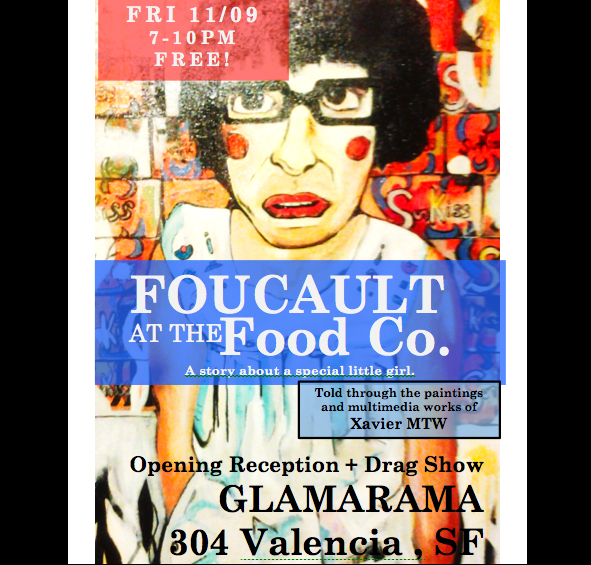 “Foucault at the Food Co.”

GLAMA‐RAMA Salon and Gallery would like to announce the opening of their new show featuring San Francisco artist Xavier MTW. The opening reception, held at Glama‐Rama (304 Valencia, SF) titled “Foucault at the Food Co.” will be held on Friday, Nov. 9th, and will run from 7‐10 PM. A show featuring local drag performers Suppositori Spelling, Martha T. Lipton will begin at 9PM as part of the opening night festivities.

The show’s tagline “a story about a little girl, the universe, and everyday low, low prices” and promotional photo gives clue to the audience that this is not to be taken as a “white box” kind of show. Xavier, who this year experienced six months of homelessness, credits a sense of humor and optimism as the biggest factors to help him get out of his situation, and in turn attempts to infuse his work with that same feeling. “It’s a meditation on existence, which I’ve been doing a lot of this year,” describes the artist, “but ‘quiet’, ‘subtle’, and ‘contemplative’ have never been my strengths, so I thought I’d work it out using a grown‐man‐child‐drag‐queen instead.”

Xavier MTW, also known by his stage/drag name Mary Tyler Whore or “Xander Spade’, the moniker which he uses to shoot gay adult films, is no stranger to “serious” work‐ a graduate of the University of Florida’s program in art history, Xavier spent the majority of his academic career studying theory. With regards to his own work, it seems to dwell in certain academic subjects, but does so almost entirely rhetorically, as if the message of the series comes across as something no more complex than “who cares? Enjoy life.”

This is Xavier MTW’s first major solo show, after having gained some exposure at this year’s Faetopia (held in June at the old Tower Records bldg) , where he was featured as a visual artist. At the same event, Xavier was also highlighted as a sex worker, making the cover of Tom Schmidt’ photo book, “ESCORT”, which was sold to raise funds for the St. James infirmary. Despite his multiple personas, Xavier identifies first and foremost as an artist and is excited to share this new series.