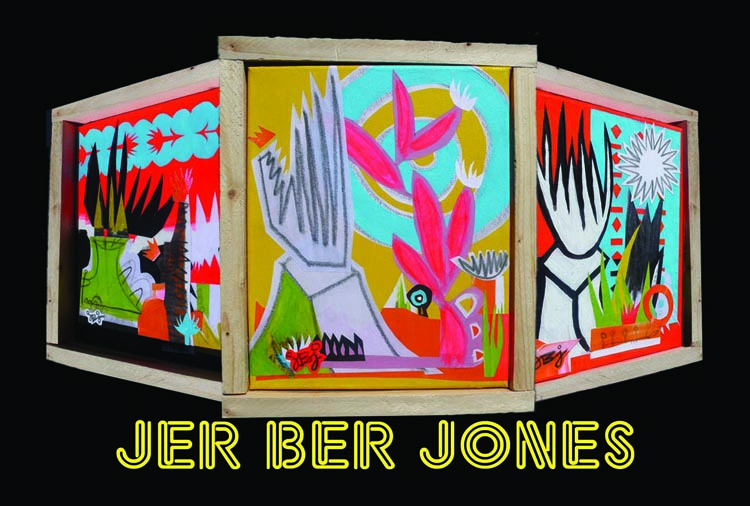 GLAMA‐RAMA Salon and Gallery would like to announce the opening of their new show featuring painter and multi-media artist, Jer Ber Jones.

Inspired by the scenic outdoors and Mormon culture of Southern Utah, Wildflowers explores the “Go West!” experience of the pioneers of the 1800s, actors & actresses of the 20th century, and reverence and respect for the wild natural beauty that continues to blossom in toxic 21st century. Multi-media artist and Internationally acclaimed musician and performer, Jer Ber Jones has been an artist in residence in the Utah desert for the past 6 months and is bringing the inspiration back to San Francisco, the artists home away from home for the past two decades. All these influences together in paintings, collage, video and even a cover version of the Dolly Parton/Trio song- “Wildflowers Don’t Care Where They Grow”. Documentation of the progress of the show from start to finish with pictures, writing and video can be found at: http://jerberjoneswildflowers.tumblr.com/

This will be Jer Ber’s second show at Glama-Rama Salon.

Performances, beverages & snacks will be provided. This is a free event.

“Jack of all trades, master of none”- Jer Ber Jones sure is having fun.

I guess I have always let my ADD get the best of me. One of the lessons I retained from my Mormon upbringing was to work hard and be industrious, a busy bee. At a very young age I realized I was a generalist artist, quickly and eagerly jumping from music, to writing, to painting and to performing.  I was organically queer, and at 13yo was ostracized from my family and Christian suburban community. I ran away from my horses, piano, home and school and set out to pioneer my own vision of performance and art. Since then, I have lived in Los Angeles, San Francisco and New York City.  Currently, I have returned to my roots, spending extended amounts of time in the super beautiful southern Utah desert. A much needed, calming, colorful and enlightening experience. In true Mormon fashion, I began to explore my family’s genealogy and deep roots in polygamy, founding members of the LDS church, and the shame & intolerance of my mixed Native American Indian blood. I am a blood-registered member of the Ute and Winnebago Indian tribes.

The L.A. TIMES says “Turn the dial of drag performance aesthetics all the way to surreal, and there you will find Jer Ber” and “aberrant performance art that’s unusual even for the L.A. art scene”.

Check out more of Jer Ber Jones work at: