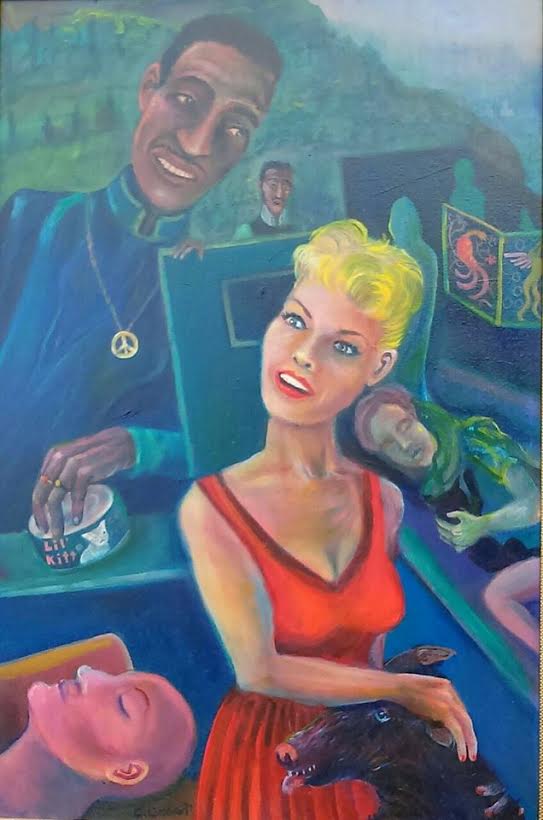 We’re super excited to welcome painter, CARL LINKHART.  His colorful surreal paintings are darkly dreamy and vibrantly alive taking the viewer on a sometimes mysterious journey into the mind and beyond.

The opening reception will feature a special live performance by the artist himself as “Carl With Records”. There will be beverages and light snacks.

This is a FREE event.

Carl Linkhart was born in Oklahoma in 1950 and has been painting from his dreams since 1970 .He lived in Tuscon Arizona from 1957 to 1969.He has been a Oakland resident since 1992 .He studied art independantly but is largely self taught and was influenced by his travels in Austria ,Greece , India, Nepal, Burma, and Mexico, as well as by memories of Arizona. Writing, film, music and theatre have been his other pursuits. His film Weekend Zombie Nurses was shown at the S.F. Gay and Lesbian Film Festival in 1985. However because of the Other worlds it can create, his main love is painting . He was especially inspired by trips to Southeast Asia and India from 1972 on, living in Thailand for all of 1972 . He studied art at Yuba City collage as well as Fort Mason in San Francisco where he moved in 1973 . He was with The Angels of Light , the early Sisters of Perpetual Indulgence , and other theatrical groups and now continues to perform as a cabaret singer and composer as Carl with Records .Since his dreams have always been vivid, colorful, and thought provoking, he took to exploring them on canvas with acrylic in 1970. After developing his style for nearly thirty years, his friends, Burl Willes and Cass Brayton and others helped Carl produce his book, Suspense Above the Pool in 1998, featuring 40 paintings with text. an intriguing journey through his personal, yet universal dream world. He showed art at various galleries such as The Georgi and The Cache. In 2004 and in 2005 he studied the Misch technique in Austria and Germany under Phillip Rubinov Jacobson and began to paint using oil and egg tempera still exploring his personal dream world. In 2008 he began numerous works on paper with oil and mixed media. He is now working on a songbook of his original songs and continues to paint almost daily.