New SF Art Show: “THE SUCCESS OF EXCESS” – The Art of Bill Bowers

“THE SUCCESS OF EXCESS” 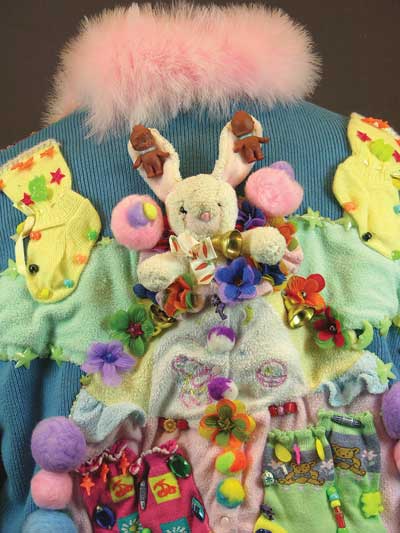 Glama-Rama is honored to welcome Legendary San Francisco artist Bill Bowers, progenitor of the Funk-and-Flash fashion and art movement, with his new show “The Success of Excess“. The show runs from Feb 9th through Mar 20th with an opening party on Sat. Feb 13th from 7:30-10:30pm. This is a free event!

Mr. Bowers began his illustrious career performing with the Cockettes, that notorious San Francisco drag theater troupe, with whom he traveled to New York, immediately making a name for himself in fashion. In step with the times, he returned to San Francisco to turn on, tune in, and drop out, and join the Angels of Light, that other great underground theatre group at the forefront of psychedelic gay liberation.

Mr. Bowers now principally makes art jackets. His instantly recognizable style combines found imagery documenting a particular theme – such as Ana Nicole Smith’s death, Hurricane Katrina, or the falling of the Twin Towers on 9-11. These images he surrounds with many-colored beads, vivid swatches of fabric and leather, plus bits of ephemera encased beneath clear plastic.

The Oakland Museum owns three of Mr. Bowers jackets (Baby Doll, Voo Doo, and Leather – the latter currently on display in the main gallery); and the 9-11 Museum in New York City owns Mr. Bowers Twin Towers jacket. Mr. Bowers currently designs costumes for Thrillpeddlers, the San Francisco theater troupe; and in 2015, he received a Theater Bay Area Award for Outstanding Costumes. A biography of his life and work, The Success of Excess (Averkieff, Edition One Books, 2015), has just been released and is available from the artist or at Glama-Rama during the show’s run.