Our Oakland Opening Art Show: “Gotta Get Away” Collage by Mike Kabler 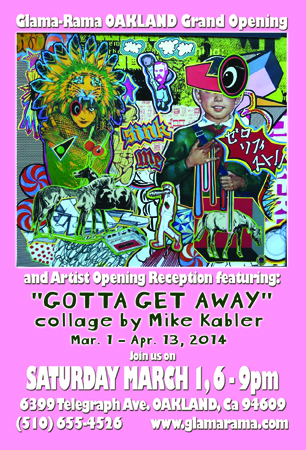 “Gotta Get Away”
Collage by Mike Kabler

Join us as we celebrate the opening of the second GLAMA-RAMA location! Our first featured artist to kick off our OAKLAND location is collage artist, MIKE KABLER with his show, “GOTTA GET AWAY”. In his current series, Mike illustrates his interpretations of inspiration and distress. These two states act upon one another to create a dynamic cycle of tension and release. This emotional landscape is manufactured with his three favorite tools – paper, scissors, and glue stick only.
Mike Kabler is a self-taught artist who was born and raised in California. He began dabbling in collage art during high school in the 1980′s after being influenced by some of his favorite record albums at that time. These included Winston Smith’s collage art for The Dead Kennedy’s, Exene Cervenka’s clip art on early X records sleeves and albums, and Jaime Reid’s iconic ripped and slashed album art for The Sex Pistols “Never Mind The Bollocks”.

The simple cut and paste method used to deliver subverted messages was attractive to this angsty and creative teenager. Soon, Mike was participating in the burgeoning zine culture. He connected the dots between the punk art he loved and the Dada Movements, which remain great sources of interest and inspiration for him. His pieces have been shown in San Francisco, Portland, New York City, and Los Angeles.

Mike resides in Oakland with his husband of 14 years. He is currently operating a floral design business called Oaktown Blooms and plans to continue learning from both paper and plants.